KCRW: Actor Danny Glover on SB 805 by Senator Susan Rubio to ‘Save the Performing Arts’

KCRW Interview: COVID-19 took a particular toll on theaters and venues, forcing them to shutter for more than a year. But as the pandemic recedes, a new piece of legislation making its way through Sacramento aims to support the smallest theaters and ensure those in the arts get paid at least minimum wage.

Senate Bill 805 was introduced by Democratic Senator Susan Rubio of Baldwin Park. If signed into law, it would allow small nonprofit performing arts organizations to pay certain payroll fees in proportion to their limited budgets. It also would create a grant fund that arts organizations could tap to pay people involved in productions. So far, it’s cleared the state Senate. As of Tuesday, the bill is making its way through committees in the Assembly after unanimously passing the Labor Committee. 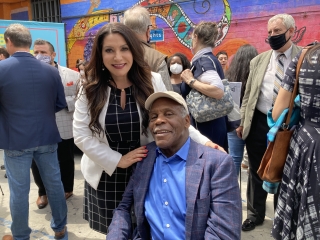 Advocates say it's a much-needed lifeline to local venues -- especially ones serving underrepresented communities of color. Among its most ardent supporters is acclaimed actor and activist Danny Glover.

Before acting on the big screen and starring in the “Lethal Weapon” series, Glover got his start on the stage in San Francisco.

“I couldn’t imagine where I’d be without local theater,” Glover reflects. He says small theaters were a home for some of the most creative work that’s been available to him.

“You learn the craft of acting in the intimacy of this small space,” he says.

Glover can precisely recall when he was bit by the acting bug and knew performing was his vocation.

“It was very crystallizing,” he says. “It was 1976. I was taking classes at the American Conservatory Theater in San Francisco, and I did a production of ‘Blood Knot’ where we organized that production and the seating capacity in our first performance was somewhere in the neighborhood of 40 to 50 people.”

He adds. “At that moment, where we were on stage doing the whole entire production, … I knew that this was what I wanted to do. I came alive in ways in that space, and it gave me the building blocks for building my own confidence. We only learn this by building confidence.”

While it was acting on the stage that kindled Glover’s passion for acting, he eventually transitioned to the screen and appeared in movies like “The Color Purple,” “Silverado,” and “Sorry to Bother You.” However, his love for theater remained, and in 1994 he launched The Robey Theatre Company in LA with his longtime friend, Bennet Guillory.

It’s a small nonprofit venue that stages shows, offers workshops, and gets some of its funding through grants from the state. Even though it’s well-established, Glover says it’s just the kind of place that would benefit from SB 805.

“We’re still a small theater; we still have actors and actresses who come in who are working on their craft,” says Glover. “It’s a place to find yourself.”

For decades, the Robey has dedicated itself to, “preserving the Black theatrical Cannon and to exploration and innovation that moves audiences to reflection and action.” Supporters of SB 805 have said it will help local theaters stay afloat and broaden access to the performing arts. Glover believes it will allow more stories and a range of perspectives to find their way to the stage.

“When I think about community theater and the role that it plays in storytelling, the stories that the community brings back to us, they tell us, essentially, ‘You’re telling my story -- my story is alive, right here on that stage,’” Glover says. “My acting, the work that I began, was not to become, initially, a professional actor, but it was something to do to tell stories. Whether it was through improvisation, or whether it was through specific plays which allows the community to see themselves and laugh at themselves, to cry, to share a common place and a common pain.

“You see personal and collective revelation happening in the small theater,” Glover says.

Part of the bill, dubbed the “Save the Performing Arts Act of 2021,” would class certain workers at small performing arts nonprofits as employees. In turn, the legislation would create a fund to pay them at least minimum wage; typically they get paid per show, and is dependent on what the organization can afford.

Rather than saying money validates the work, Glover picks a different word.

“Having some compensation for your work, I’m going to use the word ‘professionalizes’ your work -- and you know that your work has value when compensated for it.”