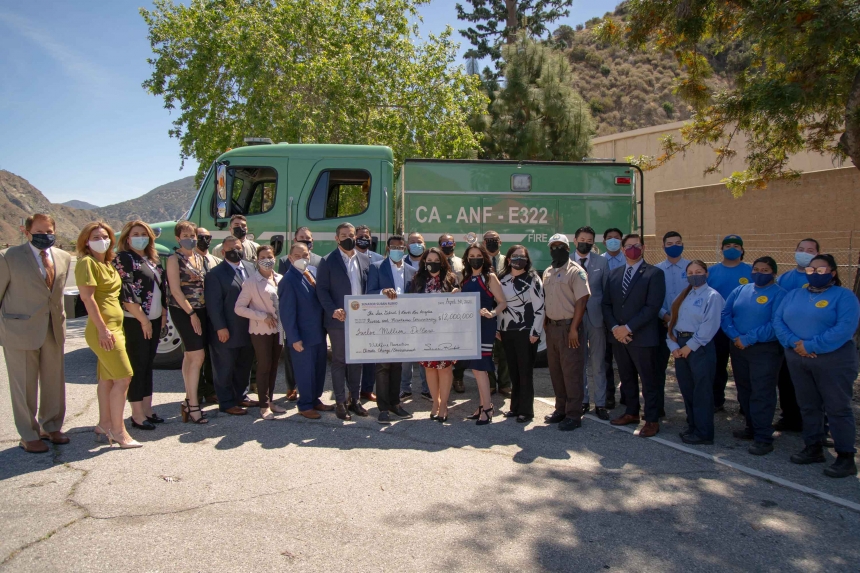 San Gabriel Valley Tribune: A sign outside the San Gabriel Canyon Gateway Center in Azusa warned that the area had a high risk going up in flames.

Nearby, local officials gathered to talk about SB 85, which allocates hundreds of millions of dollars to prepare for and prevent these very same fires.

The new package, signed into law by Gov. Gavin Newsom on April 13. allots $536 million for the state and $12 million for the San Gabriel and Lower Los Angeles Rivers and Mountain Conservancy to put toward preventative measures such as upgrades to homes to make them more fire-resilient, projects by local conservancies and more training and deployment of fire crews. 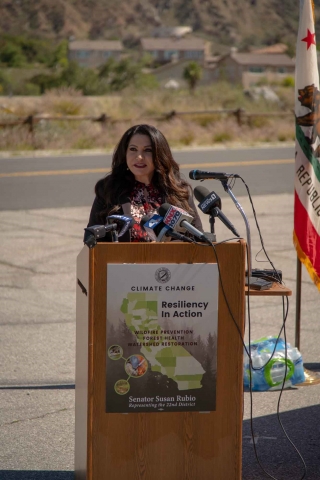 “In this past year, we learned something and that is how unpredictable the world is,” said State Senator Susan Rubio, co-chair of the Senate Leadership team on Wildfires and Climate Change Resiliency. “And we learned that we have to make sure we have a plan, and we take action early to get ahead of wildfires.”

Rubio, a major negotiator of the bill and graduate from Azusa Pacific University, also said she knew it was important that she acquire resources for the region which has been rocked by wildfires repeatedly in recent years. Last year’s Bobcat Fire burned more than 115,000 acres not far from where the officials stood.

Mark Stanley, executive officer of the San Gabriel and Lower Los Angeles RMC, said his organization is ready to hit the ground running to help the perpetually rire-threatened region.

“We are in the crosshairs of an area that badly burns, and it burns every fire season,” Stanley said. “That fire season is stretching throughout the year.”

Fire season used to last in California from May through October, when the state was at its driest. However, crews are braced for action year-round. Last year, fires in Southern California raged well into December.

Wildfires cause billions of dollars worth of damage every year.

Experts expect this year’s fire season to be just as bad, if not worse than last year’s.

California receives a majority of its rainfall in January and February – months that  were unusually dry this year.

Money from the bill will help counties and cities, needing more firefighters for more hours, pay for their services. However, California Insurance Commissioner made it clear that this $536 million won’t be the last bill the state needs.

“Not doing anything, and preventing us from tending to our forests or providing the right resources has led us to this day,” Lara said. “This is why this money that Senator Rubio and Assemblymember Rubio secured for our conservancy is critical. But this is just a drop in the bucket of what we are going to need to continue to protect lives, protect our homes, protect our planet and our kids.”

Rubio and Lara also made it clear that the bill aims to help homeowners secure reasonable insurance as well. Lara also touted the state’s work in keeping insurance policies renewable including in Rubio’s district where the state protects 350,000 home policies from not being renewed by insurance companies.

“We need to ensure that our insurance are part of the solution and not part of the problem,” Lara said. “And how we do this is by ensuring that we continue to promote incentives to harden your home.”

Lara talked about calling on insurance companies to provide discounts for customers who are willing to reinforce their homes thus making them more resistant to flames.

Residents of the area are relieved that assistance is coming. Dianne Mallon, a resident of the San Gabriel Canyon for the past 19 years, said she’s watched as wildfires have become more frequent in the past decade. During last year’s fires, silt covered her property for weeks, and every day she wonders when the next fire may come.

“Our need is real, and this funding will make sure lives like my own are safe and secure,” Mallon said.